by Admin
in Performers
40 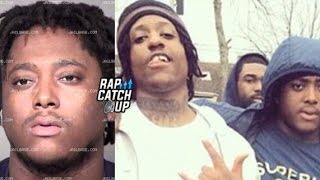 Another of Rico Recklezz’s close friends who goes by the name ‘Freeband Cashout’ was arrested recently for 2 counts of first degree murder and one count of attempted murder while out of state in Arizona.

Details of the exact event are still not clear but Cashout (not to be confused with FBG Cash/Cashout063) stands accused of 2 murders and one attempted murder. He was arrested just over a month ago on the 27th of September while in Arizona, and his bond amount has been set at $4,000,000.

The man featured on Rico Recklezz’s recent mixtape ‘Robbin Like I’m Stain’ on track 14 ‘Freeband’ and could be regularly seen alongside Rico Recklezz on Instagram and other social networking pages. He was also arrested with guns at a video shoot a couple of years ago with Rico Recklezz, and this arrest just a day after Rico’s release from a previous sentence meant Rico got sent straight back to jail.

This news comes just over a year after Rico’s other close affiliate ‘Stain’ was also arrested for murder (Read More here: http://bit.do/Stain1). Subscribe to this channel for updates on Freeband Cashout and other Chicago drill rappers’ cases.