Rapper DaBaby & His Associates Accused Of Violent Attack On Homeowner?! (Knocked Out Tooth) 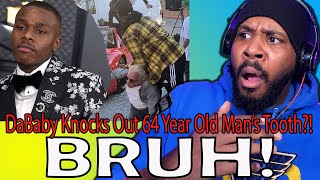 Rapper DaBaby & His Associates Accused Of Violent Attack On Homeowner?! (Knocked Out Tooth)

Rapper DaBaby is accused of being a party to a violent tussle in which a 64-year-old man claimed he was ‘beat, punched, spat on, threatened, shoved, and robbed’ in confronting the rapper over the terms of their rental agreement.

In court docs filed in Los Angeles, the homeowner, named Gary Pagar, said that he had rented the home to the rapper, 29, for the purposes of ‘a private vacation’ with nine friends for an agreed-upon fee of $43,706.

Pagar said in legal docs that the entertainer, whose real name is Jonathan Lyndale Kirk, violated the terms by shooting a music video at the abode instead, which included about 40 people, including a film crew.

Support The Pascal Show by Buying Some of Our Merch:
teespring.com/stores/thepascalshowmerch

Join in the Conversation Live on the Show Monday through Friday 9AM Central Standard Time and Tuesday through Thursday 7PM CST. Call in at 314-766-4581

Follow The Pascal Show:
Facebook.com/thepascalshow
Twitter: @thepascalshow
Instagram.com/thepascalshow
TikTok: @thepascalshow
Discord:
Copyright Disclaimer Under Section 107 of the Copyright Act 1976, allowance is made for “fair use” for purposes such as criticism, comment, news reporting, teaching, scholarship, and research. Fair use is a use permitted by copyright statute that might otherwise be infringing. Non-profit, educational or personal use tips the balance in favor of fair use.

Sammy1k Talks About Dying Twice Following Gunshot, Having 13 Surgeries, Being Prince Of The South