Is Bow a F*ckBoy?! | Growing Up Hip Hop: Atlanta 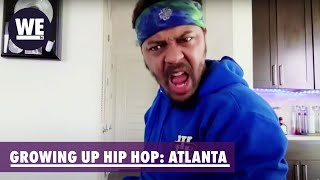 Is Bow a F*ckBoy?! | Growing Up Hip Hop: Atlanta

Bow gets called out for being a fuckboy. Is there truth to these allegations?! Watch the Growing Up Hip Hop: Atlanta Special Thursday at 9/8c.

Subscribe to the WE tv channel for more clips: https://goo.gl/1CiBkL

This season, life in the fast lane spirals out of control for Bow Wow and then-girlfriend Kiyomi. Hip hop icons Waka Flocka Flame (son of Debra Antney) and wife Tammy Rivera are back in the A and starting fresh after renewing their vows. It’s time to put their love to the ultimate test when Waka puts his full-throttle rap career on hold to manage Tammy’s breakout R&B stardom. R. Kelly’s ex-wife Andrea “Drea” Kelly and her three children move back to Atlanta and are breaking their silence in a buzzing child support battle. In the wake of prison and bankruptcy, rapper Da Brat tries to reform both her image and her finances. Brat joins forces with legendary hip hop manager Debra Antney to create an Artist Boot Camp. Not everyone is welcome in Atlanta this season… the controversial Brandon Barnes (Debra Antney’s godson) is back and his charlatan ways are finally catching up to him. Ayana Fite is on a warpath when Brandon tries to break through the family circle in a hurricane of lies. Without Deb and Waka’s star power shielding him, will Brandon be able to extinguish this massive inferno of deceit?