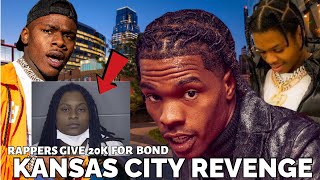 #TityanaCoppage #42Dugg #Dababy #LilBaby
Kansas City Woman charged after Tracking Down and harming the alleged suspect in her brothers unsolved case just three days after he passed away
KANSAS CITY, Mo Tityana Coppage 21-year-old Kansas City woman has been charged in connection with an incident that took place on Dec 13th.
According to court documents, Coppage told detectives that her family believes Lars may have been involved in fatally harming her 16-year-old brother three days before the incident .
This video includes the story about Tityana’s family having to deal with family hardship after her brother and cousin passed away 2 years prior !
KC woman, charged in alleged revenge, gets attention from rappers Dababy 42 Dugg & Lil Baby
Catch up not he latest Celebrity news & Tending Hip Hop
Like Comment Share
Cashapp $AndyAppleseed

Playrunna AV Talks About St. Petersburg, His Car Getting Shot Up, Surviving The Streets + More