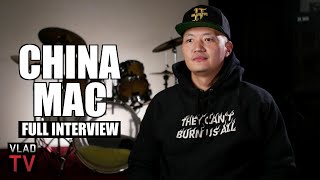 In this VladTV exclusive, China Mac returned to VladTV where he addressed a number of topics. He started by speaking out against violent attacks towards Asian Americans and dispelled theories about COVID-19 leaking from a Chinese lab. China Mac also spoke about the attack on the U.S. Capitol and Donald Trump’s pardon list before explaining why he contemplated ending his rap career. He gave his thoughts on Casanova’s federal case before revealing that some of Casanova’s co-defendants are friends of his. Later in the interview, China Mac addressed King Von’s death, 6ix9ine, Dave East joining the Crips later in life, newcomer CJ stealing the “Whoopty” phrase, and more.

Yung Fit Talks About Putting His Pain Into His Music, Fans Relating To His Music, New Projects